Aidan Hartshorn, Walgalu/Wiradjuri peoples, is the Wesfarmers Assistant Curator at the National Gallery

My school reports were full of straight Ds in every subject apart from visual art. So I’m not able to do much else. Thankfully my grades weren’t such
a problem as my extended family and friends have always been really supportive. One of the many things Aboriginal people can be proud of
is the fact that in our community being an artist isn’t considered strange. It’s only as I’ve gotten older that I’ve realised the mainstream community doesn’t really value artists, or the arts, in the same way.

My Aunty Chris was the first person to really get me on the right track. Aunt helped me finish TAFE and then apply to university. At [UNSW Art& Design] I was interested in both photography and sculpture, but most importantly I got to study under Uncle Peter McKenzie from La Perouse [in Sydney], who photographed the NSW Koori Knockout [rugby league carnival] and lectured about Bauhaus design. Uncle Peter’s work is held in the National Gallery collection. He really supported me through the challenges of university. He also curated my work into my first exhibition, at the Ivan Dougherty Gallery [in Paddington, Sydney] in 1997.

Although I had completed three years of art school and had shown my work in a number of exhibitions, it wasn’t until I worked at the Boomalli Aboriginal Artists Co-operative with Michael Riley that I felt I had someone to model my work on. Michael’s work finds the contradictions and beauty within the lived experiences of Aboriginal people from the southeast region. Michael, along with other key New South Wales artists including Aunty Elaine Russell and H.J. Wedge, really inspired me to not just curate but to continue my practice. So being an artist, for me, has always been a group effort.

Similarly this work, walam-wunga.galang (grindstones), has been inspired and created by a number of people. People like Uncle Bruce Pascoe and Bill Gammage, who have been leading the conversation about how Australia is understood. Their groundbreaking work has shown that our native grasses were carefully cultivated to not only be the most dominant species pre-1788 but that our ancestors have been harvesting and grinding the seeds of these grasses to make bread and sustain our societies for at least 32,000 years. In the process, the works of Uncle Bruce and Bill have completely shifted the very foundations Australia has built its narrative upon.

walam-wunga.galang (grindstones) is made in collaboration with Dr Uncle Stan Grant Snr AM, who I’ve been learning from and working with for many years. Uncle Stan is responsible for the revival of our Wiradjuri language, and has always been an inspiration to me. The sentences included in the work were recorded with him over a cup of tea at his kitchen table in Narrandera [in southern New South Wales]. Statements such as “Nindi-nhi bagaray-bang Nguram-bang maying-galang-girri-gu (We want healthy country for future generations)” embed the project in a cultural space and provide us with hope.

Art and cultural practices have always been the platform on which Aboriginal people share our ideas. Cultural events connected our communities and transferred knowledge. Even from the early days of colonisation, non-Aboriginal people were generously invited to be part of these experiences. For me, art is a continuation of this important process. These stories and how we tell them is what makes a nation.

Jonathan Jones’s walam-wunga.galang (grindstones) is part of the Project Series and will be on display in the Gallery in August 2021. The work will then go on tour in November as part of the Ever Present: First People’s Art of Australia major touring exhibition, supported by Wesfarmers.

This article is from the June 2021 issue of Artonview, the National Gallery’s magazine for Members. Become a Member today. 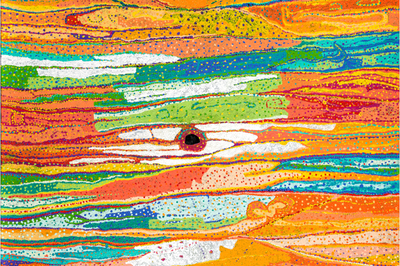