'In the distant past, a spirit being cut down a hollow log. The tree fell, and as it fell water started to pour out of it. [The spirit being] tried to hold onto it as the water flowed but his fingers slipped and the log moved off like a fish — the Eel-tailed Catfish. The log cut the ground as it went allowing the water to flow. Along the way the log heard a Burala — a Diver Duck — sing out.

'The log went into the ground at Gatji carrying earth and water with it as it went. The log wanted to go toward the sea but found the ground too hard so it came back and let the water go. The log decided to stay at Gatji, where the deep pool is near the present day camp [outstation]. At that place the log gave himself a name. The log said "I am Djammurmurr Lorrkon".' Ray Munyal

'The people today reflect on the fact that they take fish, water snakes and wild taro from Gatji where the Lorrkon walked around. That is why they paint [these creatures] on the log coffin and cut the long fingers into the mouth of the log, representing the jagged end which resulted from it breaking the ground and making Gatji creek.' Donald Thomson, field note, 1936.

Artist Paddy Fordham Wainburranga depicts the great upheavals which led to the creation of the Rembarrnga lands in ancestral times; Rainbow Serpents swallow spirit figures, which are regurgitated as features of the landscape. Many of the spirit figures are known as Balangjarngalain. Unlike Mimi spirits, who live in rocks, the Balangjarngalain live in the low tree plains country or 'station country' of the south-western and south-central areas of Arnhem Land.

Rembarrnga people relate a belief that Balangjarngalain take babies when no-one is looking, as a warning to people to take good care of their children. Believed to be half human and half spirit, the Balangjarngalain are thought to disappear into the human or spirit worlds at will. Their main role is to see that human beings behave according to the spirits' wishes. They also taught the Rembarrnga people how to hunt and to cook food.

Rembarrnga country incorporates vast grassy plains and stony, rocky regions. Due to the country's relative isolation and inaccesibility, Rembarrnga art has developed traditions and styles quite separate from each other and quite distinct from other groups in Central Arnhem Land. The artists within the group share common themes of water, stone country and spirit figures. Paddy Fordham Wainburranga says he paints 'old way' having learnt to paint from his father. He and other Rembarrnga artists dispense with cross-hatching (rarrk) in favour of multiple dots, which help describe the country while emanating hypnotic power equal to the rarrk of other groups. 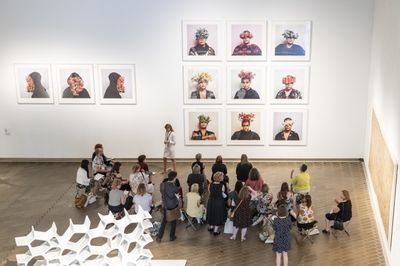