‘I like living in the 20th century … I am trying to paint the real world I live in as beautifully as I can.’

With only weeks left to go before Jeffrey Smart closes, the National Gallery of Australia’s collection of his work has grown with the acquisition of Near Knossos.

Acquired in celebration of the Gallery’s upcoming 40th anniversary, Near Knossos is a key example of the late artist’s work and an exciting addition to the national collection.

Currently on display in Jeffrey Smart, the painting shows Smart’s meticulous and realistic painting style. Near Knossos depicts a single male figure upon a rooftop who stares out towards the viewer, surveying two busses which pass by each other in the foreground.

Compositionally the painting is highly unusual and highlights Smart’s profound understanding of design and formal arrangement. Although the subjects of Near Knossos are drawn from the real, modern world, there is an underpinning tension, and the combination of elements appears strange and even uncanny.

Smart relocated permanently to Posticcia Nuova, Tuscany in 1971, where Near Knossos was painted. After decades of financial insecurity, he was now able to dedicate himself to the studio and painting full-time. Here was where he was liberated from the trends of contemporary art and found confidence in his personal artistic vision.

Smart spoke about painting the modern world, stating ‘I like living in the 20th century … I am trying to paint the real world I live in as beautifully as I can.’

Co-Curators of the exhibition, Dr Deborah Hart and Dr Rebecca Edwards said that Near Knossos exemplifies the confidence and ambition of Smart’s painting of the 1970s onwards.

‘After his relocation to Italy, Smart continued to depict the modern, urban environment with a surreal, sometimes witty edge, employing increasingly bold primary colours and complex new compositional formats. Near Knossos is among the finest paintings he created during this important period’ said Hart and Edwards.

Near Knossos is an important addition to the National Gallery’s holdings of Smart’s work which includes 17 paintings and 11 works on paper, most of which date from the late 40s and 50s.

Near Knossos has been acquired in celebration of the National Gallery’s upcoming 40th birthday.

See Near Knossos in Jeffrey Smart before it closes on 15 May 2022. For more information and tickets, please visit our website. 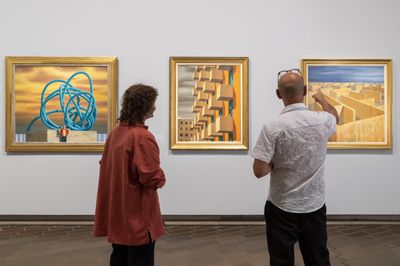 The National Gallery celebrates the work and life of renowned Australian artist Jeffrey Smart with a major new exhibition. Jeffrey Smart’s friends made cameos in several of his paintings. To celebrate his centenary exhibition, we hear from Smart’s famous sitters.