It is with great sadness and heavy hearts that we share the news of Marabeth Cohen-Tyler’s passing on Friday 23 April 2021.

Marabeth Cohen-Tyler was the wife of Kenneth Tyler AO for over thirty years. Her central role in the many successes of Tyler Graphics and the collection of some of the most significant works on paper from the late 20th century, through acquisition and gift to the National Gallery of Australia, cannot be understated.

Marabeth Cohen-Tyler joined the team at Tyler Graphics Ltd in 1985, during the production of David Hockney’s Moving Focus series and Alan Shields’ Raggedy circumnavigation series. She began a pivotal role in papermaking and collage as well as documenting the progress of print editions and writing for the Tyler Graphics newsletter. From this starting point, Marabeth became vital to almost all operations in the print studio and began to flourish in a diverse range of roles such as curation, essay writing and preparations for the first Tyler Graphics Catalogue Raisonné. However, her decision to begin photographically documenting workshop activities would have a resounding impact and would lead to the creation of the Kenneth Tyler Collection archive, held by the National Gallery of Australia. This visual resource underscores our understanding of the prints produced by Kenneth Tyler’s workshops.

In the late 1980s, Marabeth Cohen-Tyler began to assist in photographically documenting artist projects as they were happening in the Tyler Graphics studio: Her keen eye for composition and detail demonstrated a natural talent for photography, and this led to the development of her role capturing on camera the artists who would work there. A vast majority of the Kenneth Tyler Collection archive, which consists of over sixty thousand photographs, are by her. In addition to this, Marabeth also began to conduct research into all previous workshop photographers and incorporate their contributions. These collated photographs stretch back to 1963, during Kenneth Tyler’s fellowship with Irwin Hollander at Tamarind Lithography before the establishment of Tyler’s first independent workshop, Gemini Limited, which would later become Gemini Graphic Editions Limited. This work, collating together such a vast visual history of printmaking workshops in the United States from the 1960s to the early 2000s was a monumental undertaking. It is thanks to Marabeth’s efforts that the National Gallery of Australia now holds a voluminous archive that enrich our understanding of the Kenneth Tyler Collection of prints, and the revival of fine-art lithography in the United States.

Marabeth Cohen-Tyler’s relationship with Kenneth Tyler began in the late eighties and was both personal and professional: Ken would grow to know her as the love of his life and their relationship of over three decades would be enriched by the excitement of the activities in Tyler Graphics print workshop. Marabeth recalled in 2015 that:

Each day at Tyler Graphics was filled with the wildly unexpected. Even if I drew a precise outline of what I hoped to accomplish in the morning, it was dramatically altered by midday [1]

It was her optimism and skill as a trouble-shooter that helped advance many projects undertaken in the studio. She was essential to the success of any project she became involved in. The National Gallery of Australia’s Distinguished Adjunct Curator Jane Kinsman reflects that:

She’d defined for herself this role as the documenter of workshop activity. She had a great sense of what’s important in history. Not all photographers have this… She brought that kind of archival understanding and knowledge. She then became the archival recorder of the workshop. Ken always had understood the importance of documentation, whether it was print documentation or film. So she became integral to the visual recording of history [2]

Marabeth’s workshop contributions also extended to writing for the catalogue to accompany the edition of Roy Lichtenstein’s Nudes series, displaying her astute awareness of the artist’s practice. She wrote:

The Nudes reveal more about the artist’s visual language than the female form, expressing more about composition than subject matter… The resemblance to cartoon Lolitas only addresses the amusing, slightly kitsch veneer of these elegant arabesques [3]

The diversity of her abilities, and the zeal with which she approached each task, was driven by her generosity and compassion. A notable example of this compassion was her desire to reconcile Ken Tyler with his former mentor, June Wayne, director of Tamarind Lithography. Jane Kinsman recalls that ‘Wayne was a great stickler for detail and tradition in lithography, whereas Ken’s ambition was to push printing methods as far as possible’ and these circumstances lead to Tyler’s departure from Tamarind Lithography in 1965. Marabeth, sensing the opportunity, ‘sought to bring these key players in the history of American printmaking [back] together’ in later years and encouraged Ken Tyler towards a reconciliation with June Wayne [4] . 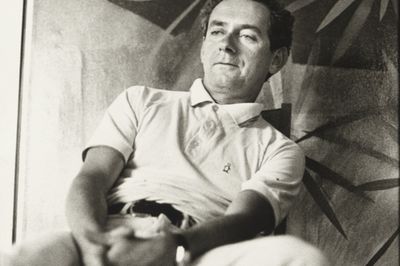