'Fiona Hall sees gardens as being, essentially, about the relationship between the body and the natural world, and that the use of space in the world through architecture and gardens is a history of how people relate to the world around them at the most fundamental level.'

At the beginning of 1996 Mary Eagle, then the National Gallery's Senior Curator of Australian Art, approached Fiona Hall to consider a commission for a work to be placed in the Sculpture Garden. The artist proposed instead that she would create a discrete garden, more like landscape architecture than art, on a site at the eastern side of the building, outside the parameters of the Sculpture Garden. This formerly out-of-sight and unused 'courtyard' space, approximately 20 metres square, bounded by the Gallery's 23-metre high bush-hammered concrete walls on three sides, and its planned temporary exhibitions wing on the fourth, was to become exposed to the public gaze and re-defined through the window wall of the foyer of the new galleries looking onto the space.

The commission was endorsed at the December 1996 meeting of the National Gallery Council and made possible by funding from the Painting and Sculpture budget of the Department of Australian Art along with a generous donation from the Friends of Tamsin and Deuchar Davy. Council members were able to actually observe the design intent through a detailed model that the artist produced to expedite planning for the commission.

During 1997 Hall refined the design and made drawings describing specific features within the garden. The logistical challenges were many. The design involved a planting of 58 mature Dicksonia antarctica tree ferns 2.6 metres tall, with a system of paths, water channels, grates, fountains, seating and a fence and gate. Expert horticultural, engineering, hydraulic and lighting advice was sought to confirm the mechanical requirements and ensure the congruent relationship between the elements comprising the design.

Construction began in January 1998. After initial preparatory excavation and concreting, Fiona Hall and two assistants decorated the main 1.5-metre wide, 55-metre long pathway and fountains with white silica and quartz pebbles quarried from a stream bed at nearby Collector in New South Wales. Pebbles of the required size were sorted from a stockpile and laid into a base of dry mortar, which was watered to make the cement set. The ferns were planted to a strict grid, and work continued at a pace to be completed by the beginning of March to coincide with the opening of the new exhibitions wing. Botanical references and particularly humankind’s tenuous relationship with nature have been central to Fiona Hall’s expression and illustrated through works such as her Genesis series of 1984, Paradisus Terrestris 1989–90, HistoriaNon-natural/s 1991 and Paradisus Terrestris entitled 1997.

The garden, based on the spiral form of the fern frond, a symbol of healing and rejuvenation, is the artist's first opportunity to realise a major permanent installation.

The Dicksonia antarctica tree fern is found in Tasmania and along the east coast of Australia. Those planted in the garden, estimated to be at least 200 years old, have stood witness to the arrival of the white man in Australia and the gradual disappearance of the Aboriginal peoples and their culture. The scant number of extant Aboriginal languages recognising the word for the Dicksonia antarctica are represented on tombstone like plaques embedded in the main path. The artist approached the local Ngunnawal people for approval to construct the garden.

The wrought steel gate at the entry to the Fern Garden is based on a schematic representation of the female reproductive system. In Christian art 'the gate' is symbolic of departure from this world and the entrance into Paradise. Fiona Hall’s friend Penelope Magee died while the Fern Garden was being installed and, passing through the gate, we step over the name 'Penny' embroidered in pebbles at the start of the path. A personal tragedy for the artist is incorporated at the very nexus between that which is outside and inside her creation.

The main path is decorated in vortex patterns much like the movement of the eddying stream from which the pebbles originated. The path unfolds in the shape of a frond, and curves down a gentle ramp to the central fountain. There is space to walk around the fountain which is set below the surrounding ground level, or to sit on the ledge while a circle of 101 thin jets of water is projected upward and falls in a parabolic pattern similar to the fronds of the Dicksonia antarctica. The fountain is the compositional centre of the work and punctuates a movement down into the earth where death and burial co-exist with restoration and re-birth. The copper membrane surrounding the edge of the fountain adds to this womb-like aspect. Auxiliary pathways formed in plain white concrete provide options for navigating the garden and lead to seats of austral verde granite with wrought steel spiral bases, or to the central recessed area. The water from three smaller fountains is channelled inwards towards the main fountain in a manner reminiscent of Islamic garden design.

A straight axis extends between the granite seats engraved with the names 'Tamsin' and 'Deuchar', in memory of Tamsin and Deuchar Davy who died tragically in a light plane accident near Canberra. 'Destiny' is engraved on a third seat after the Aboriginal artist Destiny Deacon.

The palette for the garden is refined and austere. The hard surfaces are rendered homogeneous with the surrounding architecture – white concrete and pebbles / white bush-hammered concrete walls. The fibrous dark brown trunks of the ferns and the tanbark mulch are almost indistinguishable, while the frond canopy imbues the garden with a verdant green cast. Viewed from above, from the galleries of Australian art or the foyer of the Exhibitions Wing, the Fern Garden is all curves and a resolute foil to the straight linear geometry of the surrounding architecture.

Essay published in the National Gallery's of Australia's Building the Collection publication, 2003, pp 332–7.

Australians in the Sculpture Garden 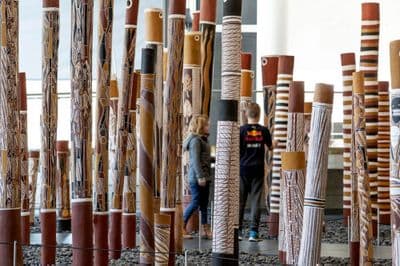 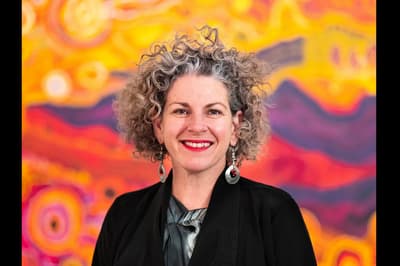