Made at Gemini GEL with master printer Kenneth Tyler and the printers Robert Knisel and Gary Reams, Keith Sonnier’s Video Still Screen series are a celebration of static and of how information flows may be altered.

Television static is visual ‘noise’: it is an interruption to the clear flow of information from sender to receiver. In this case, from a station’s broadcast signal to its intended destination: the television. Whether it is a faulty antenna, a passing aircraft or a strong magnet placed near a TV, there can be both intentional and unintentional interventions that occur to the screen. While static may not be familiar to anyone who has grown up in the era of digital technology, for a generation of artists this grainy interference became a visual shorthand for ideas of intervention. As TVs became commonplace across American households in the 1960s, artists began to ask questions about the one-directional flow of information to audiences.

A dynamic exchange: the production of Color Wipe

In early January 1973, before the Video Still Screen series was produced, Sonnier created an experimental video work titled Color Wipe. This work saw Sonnier collaborating with fellow artists Tina Girouard and Suzanne Harris to create a piece that reimagined television as a two-way communication process: Sitting in a control room, Sonnier would give commands to Girouard and Harris, who were carrying cameras, to move about a non-descript space covered with wall-mounted squares of colour. These colour panels were similar to the test patterns of analogue TV broadcasts that were used to calibrate equipment and test for image quality. Switching between Girouard and Harris’s camera feed, Sonnier would distort the colour signals he received from these wall-mounted squares, often saturating the incoming signal with another clashing colour. At one point in the video a white wall becomes green, at another point noisy static in a spectrum of different colours flickers across the screen. As Sonnier recounted in 1982:

I started doing live mixing—making narrative tapes, framing, lighting character projections. That’s when I began to work with Suzie Harris [and] Tina Girouard… I would set up the situation, there was a set frame which they could see via the monitor and they would perform with the option of working within the frame—they didn’t have to be seeing themselves all the time but it helped. [1]

What is significant in Color Wipe is the level of dialogue between Sonnier, Girouard and Harris throughout the piece: This video work is about their feedback and adjustments in relation to one another’s input. The communication isn’t one-way like traditional television. Sonnier would say of his work at the time:

It was something telling [me] that television cannot be one way. There has to be some sort of physical and emotional feedback between the two forces of sending and receiving. [2]

This ‘physical and emotional feedback’ occurs between Sonnier, Girouard and Harris as Color Wipe is physically performed, and it manifests visually as the static seen on screen. The television static is a by-product of their interventions in the broadcast process: It is unpredictable, unplanned and uncomposed. Referring to video tapes as ‘trapped time’, Sonnier would affirm that he ‘was much more interested in live video’ because of the unpredictability of the outcome.3

A translation into print

In late January 1973, under the supervision of Kenneth Tyler at Gemini GEL, Sonnier devised a series of prints derived from the video documentation of Color Wipe. Having provided photographic stills from the video,these were photographically transferred to a stencil for screenprinting. These prints replicate the video’s moments of heightened static and distortion, highlighting where multiple channels of information cross over in the original work. Now captured in the enduring form of a fixed art object, the Video Still Screen series capture a beautiful indexical trace of what many people would see as an interference to their viewing pleasure: the static produced by a dialogue between three artists.

When you first encounter these prints, they give the appearance of large colour-field paintings, or perhaps worn fabric seen through a magnifying glass: they are blocky and bright with text scrawled on their surfaces. Created from stencils printed onto multiple layers of transparent polyester plastic, each screenprint in the series allows you to see through the separated colours of the work down to the final layer made of paper. Take for example, the separate layers of Video Still Screen II:

Just as a television screen uses only the colours red, green and blue to compose the final image, Sonnier’s Video Still Screen II creates the overall appearance of having a multitude of shades, but is comprised of just four colours: silver, a vivid green, light blue and bronze.

The importance of information

In his practice, Sonnier focused on ideas of creating environments where information could be passed between people and locations. For example, his 1977 Send/Receive Satellite Network: Phase I was a two-part work that investigated the possibility of artists using satellites to create a coast-to-coast communication system, followed by a live demonstration of this idea. The purpose of the work was to ‘demonstrate the possibility of establishing a two-way communication system for public use and to oppose government and military control of public access to information’.4

Sonnier’s emphasis on information, systems and media as the basis for his work aligned him with the Process art movement of the 1970s, where the emphasis in contemporary visual art shifted away from the production of art objects, to visualising or performing exchanges of information, often through following a set of predetermined procedures, or through providing experiential or interactive environments.

Sonnier saw information exchanges as more than just communication between people, but all human experience in the world. Sonnier would say that information ‘could be anything from drinking a Coca-Cola to taking a new and exciting drug to riding in a helicopter to eating rice and beans'.5 Sonnier would exclaim that for the price of an American education you could get ‘five times as much information’ simply by leaving the country and experiencing new contexts.6 Having studied Anthropology before deciding to become an artist, Sonnier would have understood environmental factors along with cross-cultural and interpersonal exchanges as a generative space for culture and learning.

The Video Still Screen series represent this space: they are the outcome of a moment of interpersonal exchange, and reimagine television as a place for multidirectional communication. Just as we can see through the layers of this print, Sonnier asks for transparency in information we encounter through the media. 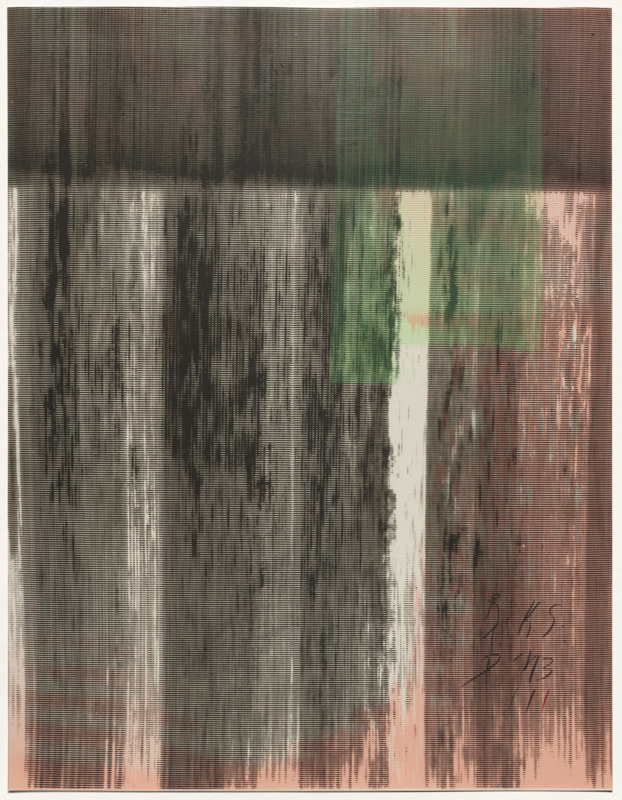 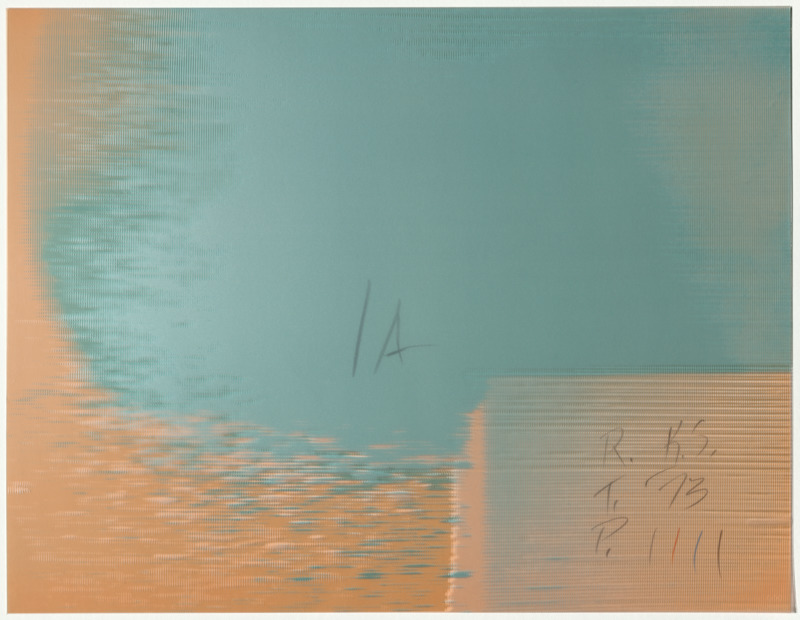 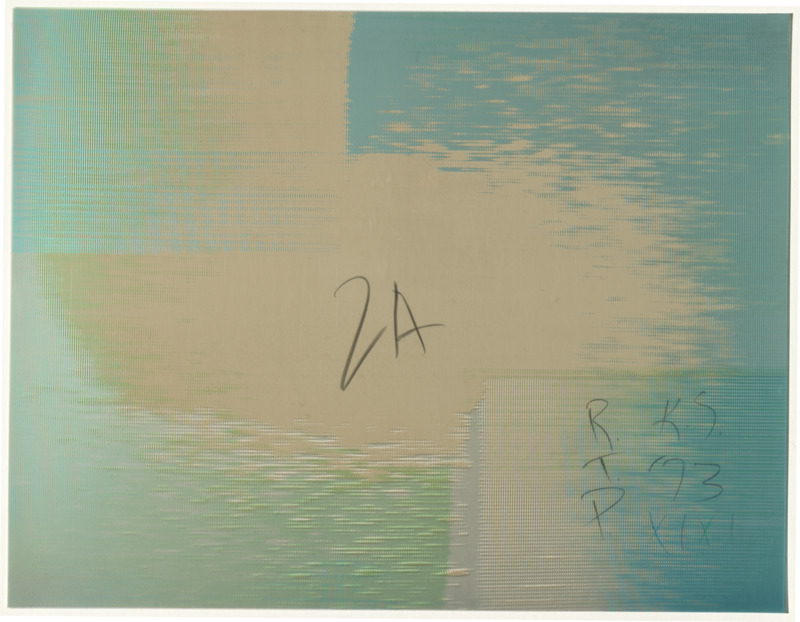 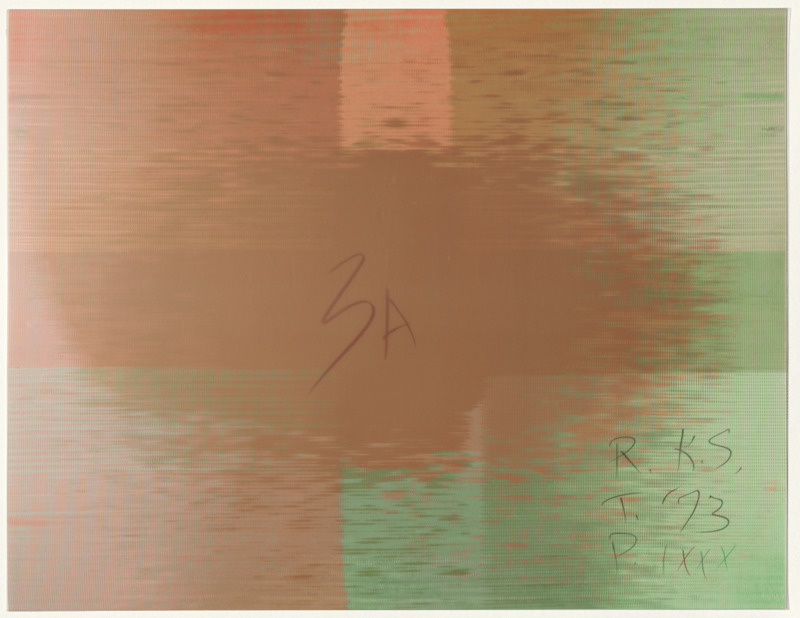 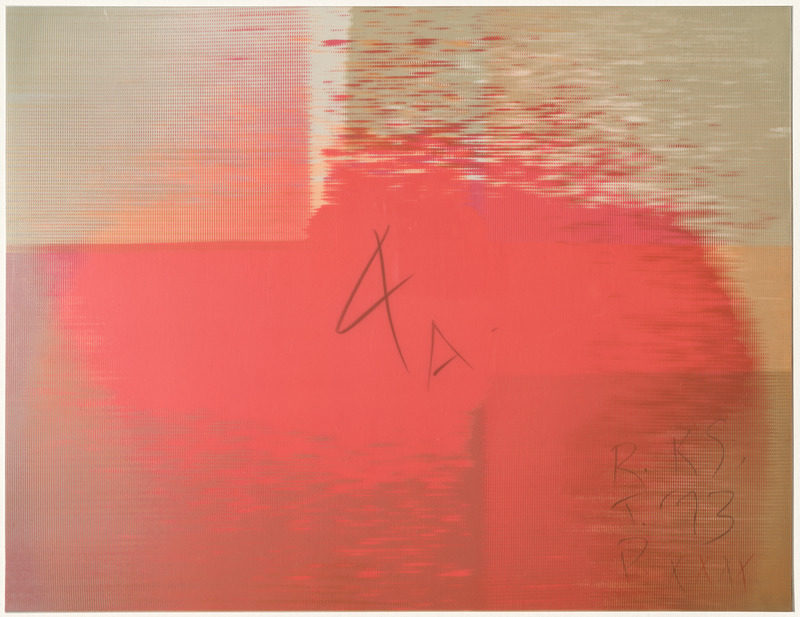 List of Prints and Printmaking exhibition catalogues and booklets

Statement of intent
Kenneth Tyler on his collection The goal is to continue adding images, photographs and film to this 'living' site, instilling it with in-depth printmaking material.